This post is part of a new series for this blog, Note to Self, where I collect together some notes about an idea related to my research. This content may be much more technical than most of the content of this blog and of much less wide interest. My hope in sharing this is that someone will find this interesting and useful for their own work.

is a random vector. Many statements of this inequality in the literature have an unspecified constant

; our goal in this post will be to derive a fairly general version of the inequality with only explicit constants.

is subgaussian if the probability it exceeds a threshold

in magnitude decays as

A (non-obvious) fact is that if

is subgaussian in the sense (1) and centered (

is subquadratic: There is a constant

), we are free to fix a version of property (2) as our definition for a (centered) subgaussian random variable.

is said to be

if its cgf is subquadratic:

and is thus subgaussian with variance proxy

equal to its variance.

Here is a statement of the Hanson–Wright inequality as it typically appears with unspecified constants (see Theorem 6.2.1 of Vershynin’s High-Dimensional Probability):

be a random vector with independent centered

be a square matrix. Then

is a constant (not depending on

denote the Frobenius and spectral norms.

This type of concentration is exactly the same type as provided by Bernstein’s inequality (which I discussed in my post on concentration inequalities). In particular, for small deviations

, the tail probabilities decay are subgaussian with variance proxy

, this switches to subexponential tail probabilities with decay rate

Mediating these two parameter regimes are the size of the matrix

, as measured by its Frobenius and spectral norms, and the degree of subgaussianity of

, measured by the variance proxy

be a diagonal-free square matrix. Then we have the cgf bound

As a consequence, we have the concentration bound

Let us begin proving this result. Our proof will follow the same steps as Vershynin’s proof in High-Dimensional Probability (which in turn is adapted from an article by Rudelson and Vershynin), but taking care to get explicit constants. Unfortunately, proving all of the relevant tools from first principles would easily triple the length of this post, so I make frequent use of results from the literature.

We begin by the decoupling bound (Theorem 6.1.1 in Vershynin’s High-Dimensional Probability), which allows us to replace one

with an independent copy

at the cost of a factor of four:

We seek to compare the bilinear form

to the Gaussian bilinear form

are independent standard Gaussian vectors. We begin with the following cgf bound for the Gaussian quadratic form

This equation is the result of Example 2.12 in Boucheron, Lugosi, and Massart’s Concentration Inequalities. By applying this result to the Hermitian dilation of

‘s place, one obtains a similar result for the decoupled bilinear form

We now seek to compare

. To do this, we first evaluate the cgf of

only over the randomness in

. Since we’re only taking an expectation over the random variable

, we can apply the subquadratic tail condition (3) to obtain

Now we perform a similar computation for the quantity

has been replaced by the Gaussian vector

We stress that this is an equality since the cgf of a Gaussian random variable is given by (4). Thus we can substitute the left-hand side of the above display into the right-hand side of (7), yielding

We now perform this same trick again using the randomness in

This cgf implies the desired probability bound as a consequence of the following fact (see Boucheron, Lugosi, and Massart’s Concentration Inequalities page 29 and Exercise 2.8):

Now, here’s a more general result (with worse constants) which permits the matrix

to possess a diagonal.

be an arbitrary square matrix. Then we have the cgf bound

As a consequence, we have the concentration bound

into its diagonal and off-diagonal portions. For any two random variables

(possibly highly dependent), we can bound the cgf of their sum using the following “union bound”:

The two equality statements are the definition of the cumulant generating function and the inequality is Cauchy–Schwarz.

Using the “union bound”, it is sufficient to obtain bounds for the cgfs of the diagonal and off-diagonal parts

. We begin with the diagonal part. We compute

For the cgf of

Substituting this result into (12) gives

For the second inequality, we used the facts that

We now look at the off-diagonal part

. We use a version of the decoupling bound (5) where we compare

, where we’ve both replaced one copy of

with an independent copy and reinstated the diagonal of

We can now just repeat the rest of the argument for the diagonal-free Hanson–Wright inequality, yielding the same conclusion 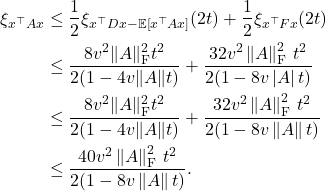 As with above, this cgf bound implies the desired probability bound.