At its core, computational mathematics is about representing the infinite by the finite. Even attempting to store a single arbitrary real number requires an infinite amount of memory to store its infinitely many potentially nonrepeating digits.1It is a well-known result that a real number has a repeating decimal expansion if, and only if, it is rational. When dealing with problems in calculus, however, the problem is even more severe as we want to compute with functions on the real line. In effect, a function is an uncountably long list of real numbers, one for each value of the function’s domain. We certainly cannot store an infinite list of numbers with infinitely many digits on a finite computer!

and then store the

. Naturally, there is a tradeoff between the length of our list of numbers and how accurate our approximation is. This post is about that tradeoff.

The big picture idea is that the “smoother” a function is, the easier it will be to approximate it with a small number of parameters. Informally, we have the following rule of thumb: if a function

on a one-dimensional domain possesses

can be approximated by a

-parameter approximation with error decaying at least as fast as

. This basic result appears in many variants in approximation theory with different precise definitions of the term “

-parameter approximation”. Let us work out the details of the approximation problem in one concrete setting using Fourier series.

Consider a complex-valued and

defined on the real line. (Note that, by a standard transformation, there are close connections between approximation of

is a function defined on

. Then define a function

. This linear rescaling of the domain is very simple and easy to understand. Now define a

. There are very close connections between approximation of

. For example, Fourier cosine expansions of

are equivalent to Chebyshev polynomial expansions of

The infinite series converges in the

is the truncated Fourier series

.3One may show with considerable analysis that Fourier series converges in others senses, for example almost everywhere convergence. We also have the Plancherel theorem, which states that

norm). However, the number

to be small. However, as we shall soon see, if the function

will be small for even moderate values of

Often, in analysis, we refer to a function as smooth when it possesses derivatives of all orders. In one dimension, this means that the

exists for every integer

. In this post, we shall speak of smoothness as a more graded notion: loosely, a function

is smoother than a function

or the magnitude of

For a function defined in terms of a Fourier series, it is natural to compute its derivative by formally differentiating the Fourier series term-by-term:

This formal Fourier series converges if, and only if, the

norm of this putative derivative

, as computed with the Plancherel theorem, is finite:

may not be a derivative of

in the classical sense. For instance, using this definition, the absolute value function

. For the derivative of

need not be differentiable at every point, but it must define a square-integrable functions at the points where it is differentiable. We shall call the derivative

, then we say that

belongs to the Sobolev space

is equipped with the norm

is a quantitative measure of qualitative smoothness. The smaller the Sobolev norm

, the smaller the derivatives of

are. As we will see, we can use this to bound the approximation error.

Smoothness and Degree of Approximation

, the error of approximation is given by

square integrable derivatives). Then we may deduce the inequality 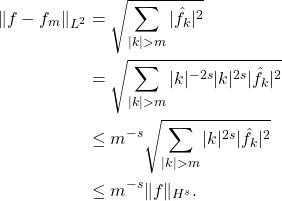 ” follows from the fact that

. This very important result is a precise instantiation of our rule of thumb from earlier: if

nice (i.e. square-integrable) derivatives, then the (

) approximation error for an

-term Fourier approximation decays at least as fast as

-dimensional space which are

For physics-based scientific simulation, we are often interested in

denote the set of all

-tuples of integers, one can show that one has the

to be the Euclidean inner product of the

. A natural generalization of the Plancherel theorem holds as well. Let

denote the maximum of

. Then, we have the truncated Fourier series

. Using the same calculations from the previous section, we deduce a very similar approximation property

There’s a pretty big catch though. The approximate function

terms! In order to include each of the first

Fourier modes in each of

in our Fourier approximation must grow exponentially in

! In particular, the approximation error satisfies a bound

is a constant depending only on

This is the so-called curse of dimensionality: to approximate a function in

dimensions, we need exponentially many terms in the dimension

. In higher-dimensions, our rule of thumb needs to be modified: if a function

can be approximated by a

-parameter approximation with error decaying at least as fast as

The Theory of Nonlinear Widths: The Speed Limit of Approximation Theory

So far, we have shown that if one approximates a function

-dimensional space by truncating its Fourier series to

terms, the approximation error decays at least as fast as

. Can we do better than this, particularly in high-dimensions where the error decay can be very slow if

One must be careful about how one phrases this question. Suppose I ask “what is the best way of approximating a function

“? A subversive answer is that we may approximate

by a single-parameter approximation of the form

As outlined at the beginning, an approximation procedure usually begins by taking the function

. Then, from this list of numbers we reconstruct a function

which serves as an approximation to

. Formally, this can be viewed as a mathematical function

followed by a function

and outputs a continuous

is a continuous function where

is equipped with the topology defined by the norm

. that is able to approximate every function in

approximation error no more than

, the number of parameters

must be at least some constant multiple of

. Equivalently, the worst-case approximation error for a function in

parameter continuous approximation is at least some multiple of

In particular, the theory of nonlinear widths states that the approximation property of truncated Fourier series are as good as any method for approximating functions in the class

, as they exactly meet the “speed limit” given by the theory of nonlinear widths. Thus, approximating using truncated Fourier series is, in a certain very precise sense, as good as any other approximation technique you can think of in approximating arbitrary functions from

: splines, rational functions, wavelets, and artificial neural networks must follow the same speed limit. Make no mistake, these other methods have definite advantages, but degree of approximation for the class

is not one of them. Also, note that the theory of nonlinear widths shows that the curse of dimensionality is not merely an artifact of Fourier series; it affects all high-dimensional approximation techniques.

. More efficient methods may exist for meaningful subclasses of

. For instance, Mhaskar and Poggio show that for functions

satisfying a compositional property, that they can effectively be approximated by multilayer artificial neural networks.

nice derivatives with approximation error decaying with rate at least

-periodic functions, such an approximation can easily be obtained by truncating the function’s Fourier series. This error decay rate is the best one can hope for to approximate all functions of this type.

One thought on “Big Ideas in Applied Math: Smoothness and Degree of Approximation”