This post is co-written by my brother, Aidan Epperly, for the second Summer of Math Exposition (SoME2).

Let’s start with a classical problem: connect-the-dots. As we know from geometry, any two points in the plane are connected by one and only one straight line:

But what if we have more than two points? How should we connect them? One natural way is by parabola. Any three points (with distinct

coordinates) are connected by one and only one parabola

And we can keep extending this. Any

polynomial is described by

coefficients. For instance, a degree-two parabola

coordinates) are connected by a unique degree-

, the polynomial interpolant for

is terrible! What’s going on? Why doesn’t polynomial interpolation work here? Can we fix it? The answer to the last question is yes and the solution is Chebyshev polynomials.

The failure of polynomial interpolation for

is known as Runge’s phenomenon after Carl Runge who discovered this curious behavior in 1901. The function

Let’s put on our thinking caps and see if we can discover the fix for ourselves. In order to discover a fix, we must first identify the problem. Observe that the polynomial interpolant is fine near the center of the interval; it only fails near the boundary.

This leads us to a guess for what the problem might be; maybe we need more interpolation points near the boundaries of the interval. Indeed, tipping our hand a little bit, this turns out to be the case. For instance, connecting the dots for the following set of “mystery points” clustered at the endpoints works just fine:

Let’s experiment a little and see if we can discover a nice set of interpolation points, which we will call

, like this for ourselves. We’ll assume the interpolation points are given by a function

.3Technically, we should insist on the function

being \textit{injective} so that the points

are guaranteed to be distinct. For instance, if we pick

(shown on vertical axis) give rise to
non-equally spaced points

How should we pick the function

? First observe that, even for the Runge function, equally spaced interpolation points are fine near the center of the interval. We thus have at least two conditions for our desired

As a first attempt let’s divide the interval into thirds and halve the spacing of points except in the middle third. This leads to the function

These interpolation points initially seem promising, even successfully approximating the Runge function itself.

Unfortunately, this set of points fails when we consider other functions. For instance, if we use the Runge-like function

Maybe the reason this set of interpolation points didn’t work is that the points are too close at the endpoints. Or maybe we should have divided the interval as quarter–half–quarter rather than thirds. There are lots of variations of this strategy for choosing points to explore and all of them eventually lead to failure on some Runge-flavored example. We need a fundamentally different strategy then making the points

Let’s try a different approach. The closeness of the points at the endpoints is determined by the slope of the function

are, the more clustered the points will be. For instance,

When we halved the distance between points, we instead had

So if we want the points to be much more clustered together, it is natural to require

It also makes sense for the function

to cluster points equally near both endpoints, since we see no reason to preference one end over the other. Collecting together all the properties we want the function

Mentally scrolling through our Rolodex of friendly functions, a natural one that might come to mind meeting these three criteria is the cosine function, specifically

. This function yields points which are more clustered at the endpoints:

which not too rough (i.e., Lipschitz continuous), the degree-

through the Chevyshev points converges uniformly to

Why the Chebyshev Points?

Now that we know that the Chebyshev points are a right answer to the interpolation problem,6Indeed, there are other sets of interpolation points through which polynomial interpolation also works well, such as the Legendre points. let’s try and reverse engineer a principled reason for why we would expect them to be effective for this problem. To do this, we ask:

What is special about the cosine function?

From high school trigonometry, we know that

coordinate of a point

radians along the unit circle. This means that the Chebyshev points are the

Chebyshev points are the

coordinates of equally spaced points on the unit circle.

This raises the question:

What does the interpolating polynomial

we simply plug in

This new function depending on

, which we can call

, is a polynomial in the variable

. Powers of cosines are not something we encounter every day, so it makes sense to try and simplify things using some trig identities. Here are the first couple powers of cosines: 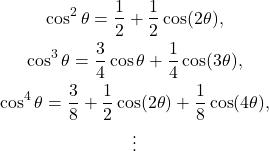 A pattern has appeared! The powers

always take the form7As a fun exercise, you might want to try and prove this using mathematical induction.

The significance of this finding is that, by plugging in each of these formulas for

, we see that our polynomial

has morphed into a Fourier cosine series in the variable

For anyone unfamiliar with Fourier series, we highly encourage the 3Blue1Brown video on the subject, which explains why Fourier series are both mathematically beautiful and practically useful. The basic idea is that almost any function can be expressed as a combination of waves (that is, sines and cosines) with different frequencies.8More precisely, we might call these angular frequencies. In our case, this formula tells us that

. Different types of Fourier series are appropriate in different contexts. Since our Fourier series only possesses cosines, we call it a Fourier cosine series.

We’ve arrived at an answer to why the Chebyshev points work well for polynomial interpolation.

Of course, this explanation just raises the further question: Why do Fourier cosine series give effective interpolants through equally spaced angles

? This question has a natural answer as well, involving the convergence theory and aliasing formula (see Section 3 of this paper) for Fourier series. We’ll leave the details to the interested reader for investigation. The success of Fourier cosines series in interpolating equally spaced data is a fundamental observation that underlies the field of digital signal processing. Interpolation through the Chebyshev points effectively hijacks this useful fact and applies it to the seemingly unrelated problem of polynomial interpolation.

Another question this explanation raises is the precise meaning of “effective”. Just how good are polynomial interpolants through the Chebyshev points at approximating functions? As is discussed at length in another post on this blog, the degree to which a function can be effectively approximated is tied to how smooth or rough it is. Chebyshev interpolants approximate nice analytic functions like

with exponentially small errors in the number of interpolation points used. By contrast, functions with kinks like

are approximated with errors which decay much more slowly. See theorems 2 and 3 on this webpage for more details.

We’ve now discovered a set of points, the Chebyshev points, through which polynomial interpolation works well. But how should we actually compute the interpolating polynomial

Again, it will be helpful to draw on the connection to Fourier series. Computations with Fourier series are highly accurate and can be made lightning fast using the fast Fourier transform algorithm. By comparison, directly computing with a polynomial

is a computational nightmare.

, the interpolant takes the form

To convert back to

, we use the inverse function9One always has to be careful when going from

values get mapped to a single

value by the cosine function. Fortunately, we’re working with variables

, between which the cosine function is one-to-one with the inverse function being given by the arccosine.

This is a striking formula. Given all of the trigonometric functions, it’s not even obvious that

is a polynomial (it is)!

Despite its seeming peculiarity, this is a very powerful way of representing the polynomial

as a combination of more exotic polynomials

are known as the Chebyshev polynomials,10More precisely, the polynomials

Writing out the first few Chebyshev polynomials shows they are indeed polynomials:

To confirm that this pattern does continue, we can use trig identities to derive12Specifically, the recurrence is a consequence of applying the sum-to-product identity to

. the following recurrence relation for the Chebyshev polynomials:

are both polynomials, every Chebyshev polynomial is as well.

Under the change of variables

becomes the combination of Chebyshev polynomials

This simple and powerful observations allows us to apply the incredible speed and accuracy of Fourier series to polynomial interpolation.

Beyond being a neat idea with some nice mathematics, this connection between Fourier series and Chebyshev polynomials is a powerful tool for solving computational problems. Once we’ve accurately approximated a function by a polynomial interpolant, many quantities of interest (derivatives, integrals, zeros) become easy to compute—after all, we just have to compute them for a polynomial! We can also use Chebyshev polynomials to solve differential equations with much faster rates of convergence than other methods. Because of the connection to Fourier series, all of these computations can be done to high accuracy and blazingly fast via the fast Fourier transform, as is done in the software package Chebfun.

The Chebyshev polynomials have an array of amazing properties and they appear all over mathematics and its applications in other fields. Indeed, we have only scratched the surface of the surface. Many questions remain:

TL;DR: To get an accurate polynomial approximation, interpolate through the Chebyshev points.
To compute the resulting polynomial, change variables to

, compute the Fourier cosine series interpolant, and obtain your polynomial interpolant as a combination of Chebyshev polynomials.

One thought on “Chebyshev Polynomials”